The woefully inadequate federal minimum hourly wage of $7.25 has not risen since 2009, while the cost of living has skyrocketed. If the minimum wage had kept pace with inflation, it would now be $12 per hour. A full-time worker earning the current minimum wage cannot pay rent in most areas of the country. 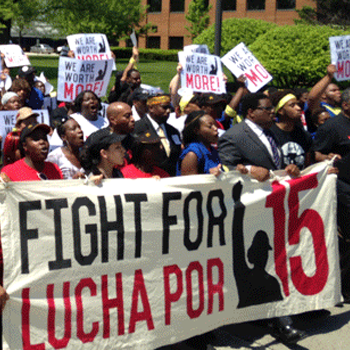 Factually, between Citizens United, gerrymandering, mass voter purges, closed primaries and that whole “living in a corrupt oligarchy that is forever shifting rightward” thing, your power as an individual American voter is severely limited. It is not however, non-existent.

As such I am baffled at why wealthy donors, the corporate media and bougie professional class liberals so casually insist the labor class voter completely surrender that tiny bit of power & influence by pledging to vote for whichever stiff the Dem Party forces on them in advance.

Factually, between Citizens United, gerrymandering, mass voter purges, closed primaries and that whole "living in a corrupt oligarchy that is forever shifting rightward" thing, your power as an individual American voter is severely limited. It is not however, non-existent.

In a turn of events that should come as a total surprise (to no one), it looks like Working Families Party’s endorsement of Elizabeth Warren was a straight pay-for-play deal.

Per Demos’ 2018 tax filing, they gave $45,000 to the Working Families Party. This was the first year Demos gave anything to WFP.

If Liz Warren answers a question on Yemen and can’t decry selling weapons [to] the Saudis like Obama and Trump, then does that mean she’d continue to sell them weapons? Many liberals only cared about Yemen after Trump continued Obama’s policy there.

This was originally a comment over on Google Plus, but maybe I can flesh it out a little more here.

This really is the fundamental problem. I left the Democratic Party with the authorization of force that gave then-president Bush unprecedented war powers, following 9/11.

The party of Mondale is long, long gone, if it ever existed and it wasn’t just a figment of my 18-year-old imagination and idealism.

The thing is, things have only gotten progressively worse since I left the party, and electing Democrats doesn’t change any of that. Things get worse for human rights and foreign policy with a Republican in the White House – and they’ve gotten worse with the current, Democratic occupant.

But folks will continue to pat themselves on the back over trivial differences between the major parties.

Apple, technology, and other stuff by Jason Snell & Dan Moren

We are the Party of Solutions!