This is kind of a quick sketch of an idea. This may turn into more later…

Posted a couple of “new” tracks. I started this around a year ago, and promptly got too busy to finish.

On the show this week, several items covering the drumbeat to war in Venezuela, and some historical context – the coup in Chile against Allende, during the Nixon administration, where we see several key aspects of the Venezuelan coup originated. Greenpeace has a call for comment to stop drilling in the Alaskan National Wildlife Refuge, Flint still has contaminated water, and I take a look at what might be behind Dianne Feinstein’s opposition to a real Green New Deal (as always, follow the money).

US threatens ‘secondary sanctions’ against those who refuse to back its Venezuela coup
https://www.rt.com/news/453114-us-threatens-secondary-sanctions-venezuela/

Empire Files: The reality of US military attack on Venezuela is very real
https://mobile.twitter.com/EmpireFiles/status/1102392324879876096

You would have to be crazy to rule out US as behind any major event in Venezuela, considering it’s in the middle of an active regime change op & will stop at nothing to see it through
https://twitter.com/abbymartin/status/1104090409527984128

Venezuela’s blackout is being used as new pretext for coup. Shortly before US overthrew Allende, there were also major blackouts coupled with widespread CIA sabotage to “make the economy scream”
https://twitter.com/abbymartin/status/1104100191861260288
https://www.nytimes.com/1973/08/14/archives/blackout-interrupts-address-by-allende.html
https://en.m.wikipedia.org/wiki/United_States_intervention_in_Chile

How bad does Guaido have to be to have his death squads stopped by Colombia, the paramilitary state…?
https://twitter.com/JSCCounterPunch/status/1103716265338626048
https://www.bloomberg.com/news/articles/2019-03-06/heavily-armed-soldiers-aborted-plan-to-enter-venezuela-by-force

“The ruling class comes up with a lie to manufacture American consent for its all-American war crimes, and that lie is then sprayed like laminate all over average American citizens.”
https://twitter.com/commondreams/status/1104074384996745217
https://www.commondreams.org/views/2019/03/08/we-are-being-lied-war-again

Thousands of Venezuelans took to the streets to march against interventionism in the country, as part of the celebrations of the national Bolivarian Anti-Imperialist Day.
https://twitter.com/telesurenglish/status/1104517218212110337

The imperialist sadists leading US policy on Venezuela are bragging about collectively punishing civilians with sanctions & economic warfare. Sociopath Rubio boasted, “Venezuela is going to enter a period of suffering no nation in our hemisphere has confronted in modern history”
https://twitter.com/benjaminnorton/status/1104860942800695302

NY Times: A 2016 Review: Turnout Wasn’t the Driver of Clinton’s Defeat
Instead, it’s clear that large numbers of white, working-class voters shifted from the Democrats to Mr. Trump. Over all, almost one in four of President Obama’s 2012 white working-class supporters defected from the Democrats in 2016, either supporting Mr. Trump or voting for a third-party candidate.
https://www.nytimes.com/2017/03/28/upshot/a-2016-review-turnout-wasnt-the-driver-of-clintons-defeat.html

I called this last November. The DNC is going to load up the field with candidates so that no one will be able to secure the majority required in the first round and then in comes the super delegates in the 2nd round and they pick the establishment candidate.
https://twitter.com/barbaralnewsome/status/1100909482635333632

That office was led by newly elected Senator Kamala Harris (D-CA), who was serving as California’s Attorney General at the time. Criticisms of Mnuchin as a nominee provoked inquiries toward Harris as to why she refused to take any action given the evidence of violations her office uncovered.
https://www.counterpunch.org/2017/01/25/dem-senator-received-donations-before-and-after-failing-to-prosecute-trump-nominees-bank/

Of all the consequential actions our government can take without our consent, namely wars and expanding oil drilling, Axelrod blames inaction on the voters. What a prick. Our government has horrible leadership.
https://twitter.com/happierer/status/1102974425740337152

There’s a grim irony, particularly in Manning’s case, that the purported purpose of a federal grand jury is to act as a safeguard from the improper motivations of government. We need not support Assange personally to understand that his prosecution for publishing Manning’s leaks would expose news organs who also published the documents — like the Guardian, The Washington Post, and The New York Times — to the same liability. The precedent that could be set for state repression of journalism is beyond troubling.
https://theintercept.com/2019/03/02/chelsea-manning-subpoena-grand-jury/

Please send a letter of support to Chelsea Manning, if you’re able. 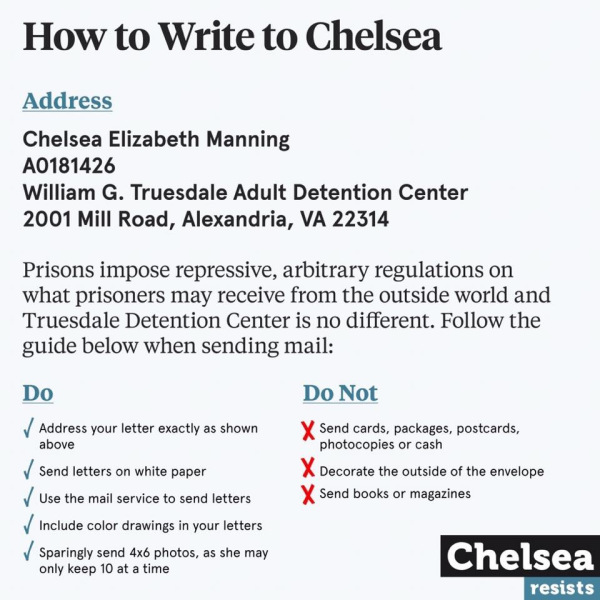 On the show this week, I’m covering the release of Palestinian legislator Khalida Jarrar, held for nearly two years by the Israeli government without charge or trial. Also, the UN Commission on Human Rights released a report last week on Israeli snipers knowingly targeting emergency medical workers, disabled people and children at the 2018 Palestinian Right of Return protest. Finally, several items covering the continued lead up to war in Venezuela.

Edit: I misspoke in the show. That should be two million people in Gaza facing food and medical care shortages, not twenty.

@UN Commission of Inquiry on the 2018 protests in #Palestine finds that “Israeli snipers shot at journalists, health workers, children and persons with disabilities, knowing they were clearly recognizable as such.

Palestinian MP Khalida Jarrar was released today from an Israeli prison where she was held for almost 2 years without charge or trial. Her case isn’t unique, it’s crucial to remember it is the norm for Israel to detain Palestinians for indefinite periods without being charged.

I went to a market this morning in Miranda state, Venezuela and I still couldn’t find the “humanitarian crisis” the US gov and corporate media keep talking about.

An Ocean of Lies on Venezuela (Empire Files)

Show Notes: I’m back! Relaunching the show as a proper podcast with actual commentary from me, this time. Comments are open!

Trump: We’re Too Far Along
https://www.realclearpolitics.com/

Tonight we introduce Green Uprising, a new home base for peaceful revolution where we turn resistance from the last election into rebellion in the next. Green Uprising resists not just Trump, but the whole bipartisan corporate system spreading war and injustice across the globe, paving the way for demagogues like Trump.

LIVE on A Green Way Forward it’s OPEN LINES! We are taking your questions and comments and talking about the news.